A Brief Blog on the History of Car Washes

Hello Cheetah Family! Have you ever wondered what car washing was like before modern technology? (Fun Fact: Cheetah Clean was founded in 2007!)  Keep reading to find out more about the history of car washes!

Using today’s technology, car washing is super fast and easy. It is hard to imagine life before all of the modern conveniences we have grown so accustomed to, especially for the younger generations. When cars first started appearing on the market, washing them was not an easy task. Until the first semi-automatic car wash made its debut in the United States in 1946, all washing was done by hand. As you can probably guess this was very time consuming; but, people were still able to make a business out of it! 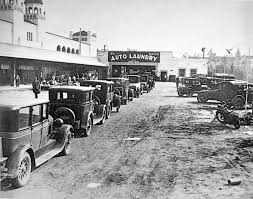 Before car wash businesses, there were only two ways to wash your car: by hand yourself, or have someone else do it by hand. Two men from Detroit saw there was a need for people to wash cars (since no one likes doing it themselves) so they opened up the first car washing business called “Automated Laundry.” While the name is misleading, it was not ACTUALLY automated. Instead the workers would push the car through an assembly of workers where one would wet the car, one would soap the car, one would rinse, and one would drive the car as it went past. This method unfortunately was not fool-proof. As you can imagine, the attendants would get tired after only a few cars. This remained the typical model for auto wash businesses until the 1940s, with 32 manual auto washes across the US.

After seeing the flaws in the current system, the “automatic” car wash was born in Hollywood. The “automatic” car wash consisted of an automatic pulley system that hooked to the bumper of the car and manual brushing. In 1946, a man named Thomas Simpson created the first semi automatic car wash. Simpson’s car wash consisted of a conveyor belt, an overhead sprinkler system, manually operated brushes, and 50 HP air dryer. 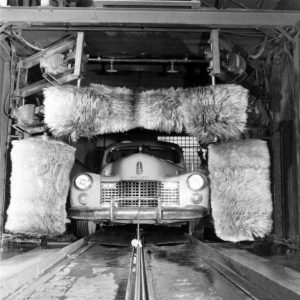 In 1951 the Anderson Brothers got the idea to fully automate their wash and invented the first hands free car wash in Seattle. It worked very similarly to Simpson’s wash except the brushes were now automatic. Other business owners got wind of their wash and began installing automatic equipment on their washes. In 1955, Dan Hanna made his own wash called the Rub-A-Dub in Oregon after encouragement from the washers in Detroit. This would later be the first chain of car washes in America. In 1957, Hanna Enterprises had around 31 car washes. He operated these washes until 1959 when he made the first mechanized car washing system. 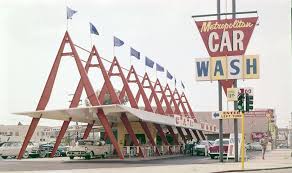 By the 1960s, Hanna had established himself as the main source of auto washing equipment. During this time he introduced the wraparound brush, roller-on-demand conveyor belt, soft cloth friction washing, a water recirculating system, as well as several new and innovative ways to wash tires. By the late 60s, car washes had now become a prominent industry in the U.S. They also began taking off globally, a few car washes popping up in Japan.

Car washes today have used these models and improved them through time, and modern technology. Car washes would not be the way they are today without their brief, but innovative history.